The Kientzler family has been growing vines for 5 generations in Ribeauvillé and the surrounding area. As a secondary activity in the nineteenth century, wine growing became their main activity in the mid-twentieth century. In 1866, Dominique Alphonse Kientzler bought a grocery shop in the centre of Ribeauvillé. He also owned vines inherited from his father and grandfather, both bakers. In those days, winegrowers used to have another job to make ends meet. In 1895, when Alsace was German, Alphonse Dominique created a wine cooperative in Ribeauvillé together with a few other winegrowers. His son, Alphonse inherited his dynamism and sense of responsibility and became the mayor of Ribeauvillé before WW2. He was reelected after the liberation in 1945. 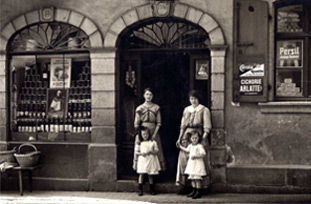 Entrance of the grocery store in 1912

He took over the grocery shop which was in full swing. His main customer was a convent housing 900 sisters situated around the corner. Alphone delivered dry food, condiments, fruit and vegetables to the “Sisters of Divine Providence of Ribeauvillé’ twice a week. He also took part in the creation of the Wine fair of Ribeauvillé which was held each year next to the Catholic Church and has now moved to the City Garden.

He employed 3 workers to look after the vines and installed a cellar and a wine press near the grocery shop, in what has become today the Tower Hotel. The stables were situated in the courtyard, housing 2 horses to plow the fields and a cow. Alphonse Kientzler sold most of his wine in bulk but nevertheless bottled his best wines. His main production was Muscat, Chasselas and Riesling, the latter being already in those days the king of the cellar. 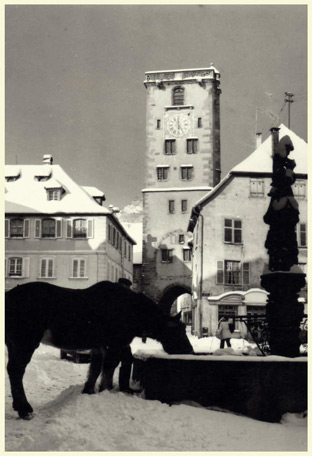 It was François, Alphonse’s son who decided to specialise in winegrowing. He studied viticulture in Grangeneuve, Co. Fribourg, Switzerland. When he returned to Ribeauvillé, he devoted himself entirely to growing wine.

Unfortunately, WW2 interrupted his career but François survived deportation and returned to his family vineyard in 1945. After having spent 2 years at the Viticultural School of Beaunes, in the 70’s, his son André started working on the family vineyard with his father. The business employed 6 people and spread over 9 hectares, a third of which was Chasselas vine stock.

Father and son started a huge task to restructure the vines by destroying older vine stock and replanting noble vines. Ever since, Riesling has become the major vine stock of the vineyard, together with Pinot gris and Gewurtztraminer.

The next big step was moving the business from the city centre to its current location on Bergheim Road. The premises situated in the city centre had become cramped and difficult to access, so moving out of the city enabled to build more suitable buildings. This was the beginning of mechanising and the first exports. Thanks to the high quality of the wine, making the most of his heritage, André was elected Winegrower of the year in 1992 by Gault & Millaut. Nowadays, the vineyard extends over 13,8 hectares, including 4,4 hectares of Grand Cru, mainly in Ribeauvillé. The vineyard also has plots in Bergheim, Hunawihr and Riquewihr. Since 2009, Thierry and Eric, André’s sons, have taken over the business. The first looks after the vines whilst the latter is responsible for sales. 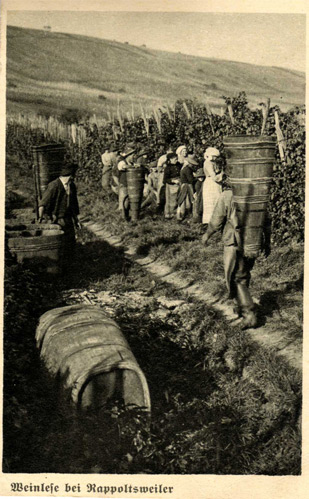 Grape picking in Ribeauvillé between WW1 and WW2.

Presentation of the domain and Culture